Everything OSB – Past, Present, and Future

Since its introduction into the market, oriented strand board (OSB) has become a very popular panel product in a lot of different industries.  While many manufacturers were very cautious about using OSB, its rise in popularity is largely owed to technological advancements of the product, and it is now seen by many as a cheaper alternative to plywood.

Let’s take a look at why OSB is winning when considering OSB vs. plywood.

What Exactly is OSB and How is it Made?

OSB is an engineered wood paneling that is made by compressing layers of wooden “wafers” or shards into a flat panel.  This is one of the reasons why OSB is sometimes referred to as “waferboard” or “chipboard.”

In general, manufactures prefer using fast-growing trees like aspen or poplar to create the wafers because these trees are readily available.  That makes OSB both a cost-efficient and sustainable product for just about any industry, but especially for use in wooden crate products.

In order to create the oriented strand board, manufacturers layer and compress the wooden wafers.  Each layer is then alternated with the application of an epoxy resin that waterproofs and treats the wood.  Once compressed, the OSB is treated again with epoxy resin to prevent the edge of panels from swelling and minimize the growth of biological contaminants.

Because of the way that OSB is manufactured, it is strong and has minimal voids or variation.  In addition, the manufacturing process allows OSB  to be made into any size needed.  That adds to the value and versatility of OSB as a panel product.

How Was OSB Invented?

OSB was officially created by Armin Elmendorf in 1965.  At the time, he named it “waferboard.”  With this evolution in engineered wood products, waferboard was met with many questions and hesitation from industry leaders at first.  After 15 years of refining and testing the creation process, Elmendorf’s waferboard eventually saw huge popularity and was renamed OSB.

With its improved manufacturing process, oriented strand board quickly became popular across the nation, especially in areas with large amounts of aspen trees or poplar trees.  OSB helped both the lumber industry and forest management programs across the nation, because there was no need to use “old growth” trees to manufacture OSB.  That’s what made OSB manufacturing an inexpensive and sustainable solution.

What Are the Benefits of Using OSB?

There are many benefits of using oriented strand board, but one of the biggest reasons to use it is the shear strength it provides.  That’s one of many reasons why many choose OSB over plywood for their crate or pallet needs.  Generally, OSB is twice as strong as plywood, when it comes to a panel product.

On top of that, OSB can take a pretty good beating and still maintain its shape and structural integrity.  Because of its unique design, OSB stays strong in situations where plywood tends to crack and delaminate under pressure.

In the past, critics ridiculed OSB because it was prone to warp and swell near the edges when exposed to excessive moisture.  OSB has a moisture content of about 6%, depending on the manufacturer, which is much less than wood.  Because of this, OSB used to be prone to absorbing moisture at much higher rates than other wood paneling.  With the implementation of new practices, manufacturers have developed techniques to further seal and protect OSB against moisture retention.

As we mentioned earlier, oriented strand board is also a highly sustainable product because it’s made from fast-growing trees.  Not only that, but it’s also made with the less desirable wood that’s left over after the high value cuts are extracted from the logs.  This makes OSB a highly sustainable and eco-friendly product.

Lastly, OSB can be manufactured into custom-size panels.  That means that it’s possible to get oriented strand board in a wide variety of sizes and shapes to better meet the needs of your transportation packaging.

Since its introduction into the market, oriented strand board, commonly known as OSB, has become a very popular product across many different industries.  Although many were initially cautious about using the original “waferboard”, it has since become a staple in the industrial wood, pallet, and crate manufacturing industry.  OSB has become a solid alternative to the traditional use of plywood. 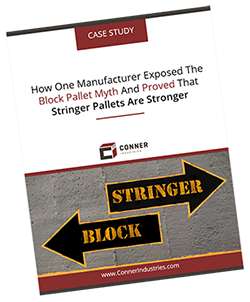